Going into surgery, I was in pretty rough shape.  I felt sick (although I didn’t want to say so, specifically, to anyone other than my spouse… I kept saying “slight head cold”) and exhausted.  Luckily, my cold symptoms were not too worrisome, medically:  no fever, no chest congestion / trouble breathing.  Other than the cold, I felt mentally prepared.  In retrospect, I totally was. But, not so much prepared for the recovery process… 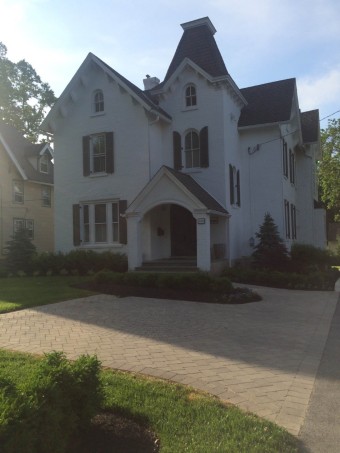 Everything went smoothly, except for the fact that the surgeon was about to do the wrong procedure.  I was afraid this was the case because during the entire process including the consultation, the paperwork continually listed “double incision mastectomy with free nipple grafts.”  Even after I called a month ago to verify we were on the same page with the peri-areolar procedure and was assured that we were.  So when she came in and said, “Double incision.”  I said no, and luckily wasn’t phased by the mix up.   She said peri-areolar, I said yes, and she drew circles around my areolas.  I talked to her about nipple size, saying I wanted them small.  She said, “They’ll be smaller.  Your nipples will be nipple-sized.”  That was not very reassuring, but after she left, and before the anesthesiologist came back around, my spouse clarified that she had said, “your nipples will be nickle-sized.”  That sounded better.

If you want to read a more detailed account of what it’s like, here’s a good one someone wrote just a few days ago:  Surgery.  It was a lot like that. Back at the guest room, we texted with some people, a Philly friend came and visited for a while, we watched Seinfeld, and we went to sleep early.  I was up a lot that night, ravenously eating snacks and just not able to get comfortable.  I was sleeping sitting up, at the foot of the bed, a lot.

Day after surgery – The next day, we were driving home.  And I was in bed by 6pm.  My cold symptoms were back, and I was not feeling so good anymore.  I’ll bet that first day, I had a good mix of adrenaline and endorphins flowing, plus whatever they put in the IV.  And then I crash.

2 days after surgery – I sat outside for a while.  A friend came over, and we chatted for about 30 minutes before my spouse and they went thrift shopping.  We listened to some podcasts.  I read a book about subway art, written in 1984, a book I had found in the trash at school.  We watched 2 episodes of Mad Men.

Drinking water. (I did not plan on wearing this Hawaiian shirt. Turns out I don’t have that many short sleeved button down shirts that will comfortably fit over the drains!)

3 days – Podcasts, Mad Men.  I stopped taking the pain meds (Percocet) because they were causing OIC (opioid induced constipation).  The pain increased throughout the day, but it’s not like Percocet was all that effective anyway.  We went to my spouse’s parents’ house, which did not go so well (I could not bear being social, especially once a family friend came by – I just went and sat outside.)  We went to the grocery store on the way home – that was OK.

4 days – Glad to be off Percocet – realized that there are other pain meds (D’uh!) so I took an Alieve.  I feel like 95% of the pain now is due to this fucking surgical wrap I have to wear for 7 days.  I can only take shallow breaths; I can’t laugh or yawn or cough; it’s digging into my ribs and underarms; it’s way too tight; it just fucking sucks*.  There’s a reason I didn’t bind!  We went to the movies – nice to get out of the house.  Also, one of our cats got suddenly freaked out by my Frankenstein walk (even though I’ve been doing it for days), and she bolted off the table, knocking a bunch of my records onto the floor.  It was loud.  Also, I had a mini melt down about hating asking for things that are so basic, telling my spouse that I keep doing things because I would rather do them than ask – open and close doors, get ice trays out of the freezer, pour water from our britta, reach up high for a Q-tip, carry my laptop…  I gotta stop so I don’t mess up my healing process!  She was on it and strategized a bunch of new ways to make things easier!

5 days – My spouse went back to work.  Our refrigerator was making a loud noise this morning and stopped working.  That was stressful!  I called a repair person, then changed my mind because we should just buy a new one because this thing is super old.  My spouse’s mom came over to save our freezer items for us, store them at her house.  Then the fridge started working again, so it feels like less pressure – we’ll still get a new one, but it doesn’t have to be today.  A friend brought over lunch – I liked that!  My mom stopped by after work.  I felt anxious and lightheaded for a lot of the day.  I was feeling really confined/claustrophobic, as if this binding thing were made of plaster of paris, or steel.  I had a serious melt down (I got an all-too-real glimpse of what it could feel like, if I lost it right now – I felt in danger of becoming more and more triggered), and told my spouse we need more people around us, helping.  She called her parents to make that happen.  We talked and I felt a lot better.

6 days – That’s today!  I only managed to sleep 3 hrs.  I’ll be spending more time with people today.  I’m just going to try to relax.  I also gotta start preparing for going back down there tomorrow, to get this fucking binding off.  Oh, and the drains.  I’m going with my mom.

Overall, I’m in more pain than I thought.  And I’m way less out of it than I thought (like, I didn’t get to be in a fun pain-killer induced haze, haha).  And I don’t like TV that much and I’ve been up and about a lot.  I hate not doing things because it reminds me of being depressed.

*  Note:  this may be the only time I’ve used swear words on this blog (in reference to the surgical binding).  It’s that bad.  Also, though, I appreciate this thing because it reminds me of where the limits are and also it’s preventing me from coughing stitches open or anything like that.