← I decided to stop taking testosterone, for now
Finances and the LGBTQ community →

Hey, I have an essay in this anthology, Nonbinary:  Memoirs of Gender and Identity, which is finally being released by Columbia University Press, officially on April 9th, but you can go ahead and order your copies now!  This has been roughly 5 years in the making, and through that time, I went through lots of different edits and re-writes with Micah Rajunov (genderqueer.me), one of the two editors.  Both he and Scott Duane did tons of behind-the-scenes work to make this happen.  I just sat around, for the most part, and waited to see what was going to become of it!

The time-frame was so long that I pretty much forgot what I wrote.  And I was a little apprehensive to revisit it.  When I first heard news of the release date, I had a mixture of emotions:  excitement and pride, to be sure.  But also a little bit of hesitation, like, would I still identify with whatever the hell I had written?!  Would I be cool with everyone, friends and family, reading it?  I decided not to overthink it; when I got my copy in the mail, I posted this pic to my social media, and just let what was gonna happen, happen. 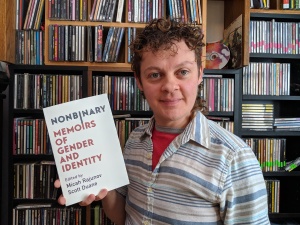 However, I still hadn’t read it!  I was stalling.  My spouse went ahead for me, and reported back, which helped me get used to the idea.  When I first tried, I couldn’t read it linearly – I just skipped around and tried to get the gist, get a sense before finding out all the details.  Then I went back and started with the anthology from the first contributor, and when I got to mine, I finally did read it all the way through.  Phew.  I’m almost done with the whole book now.  Lots of really amazing, diverse stories.

People started ordering their own copies.  My grandpa and my aunt have already read it and connected with me about it!  I ordered a dozen to give to friends, my therapist, my local Out Alliance’s library, etc.  It’s starting to feel real, and the excitement is growing, now that I can kinda wrap my head around it.

If you wanna order a copy, you can do so through Columbia directly, here:  Columbia University Press
Or, there’s always Amazon:  Amazon

6 Comments on “I’m a published author!”