← Getting to know each other #2
Party, vacation, and TERFs →

Back to school / Janitors in pop culture #1

The day before yesterday was my first day back to cleaning up after students.  It was terribly hot and humid (more so in the school than outside) and I promptly got a gross warm-weather cold; all stuffy in the head!  I’m back to working late nights.  Overall, it will be good to get back to it; right now it feels awfully lonely.

As an ode (of sorts) to my co-workers, and working all together this summer, here’s a partial list of the most frequently talked about topics:
– basements / sheds / generators / dehumidifyers
– cell phones / provider plans
– donuts and other snack foods
– retirement
– grilling food / alcoholic beverages / being a host
– “got any weekend plans?” / “how was your weekend?”
– teacher quirks
And not a whole lot else…

The cool thing about having been writing here for over a year is I can go back and find out what I wrote, at this time last year.  Here’s what it was.

I’ve been thinking lately that I’m writing lots about trans and queer identities and experiences (awesome!), but that I’ve been ignoring the other half of my moniker.  So, I’m going to start a new series, from time to time, that highlights portrayals of janitors in movies, TV shows, books, whatever.  I’ve been meaning to do this for a while!

In this movie, Matt Damon plays a bad-ass boy genius working as a janitor at MIT.  He solves an impossible math equation (in secret).  He then is “discovered” by a professor, is forced to see a therapist in order to avoid jail time (for assault – he likes to get into fights), and is trying to find a balance in his life between love, his natural talents, and what he actually wants to do.  (Writing out this summary from memory, the movie sounds so outlandish and absurd.  It’s actually pretty gripping; look out for Robin Williams in one of his more serious roles, as Will’s therapist.  Also look out for an awesome soundtrack by Elliott Smith.)

The first time we see Will, he is mopping a hallway floor.  The movie people might have wanted to get a janitor-consultant for this movie (haha), because he is doing it all wrong.  Will is pulling the mop straight out of the bucket and slopping it all over the floor (without wringing out the excess water ahead of time.)  Completely unrealistic.  Also, the hallway is full of students, which is not an ideal time to pull out the mop.  Talk about slipping all over huge puddles of water en masse! 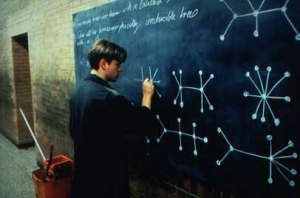 Later on in the movie, Will is talking with his therapist, Sean, about careers.  (I’m condensing the dialogue a little, for efficiency.)

I could be reading too much into it, but  the tone of the therapist’s voice, while delivering that last part, is complete, total snark (his character plays up the snark quite a bit though – to match Will’s tone.)  Basically saying, “just keep sticking to what’s ‘honorable,’ and see how far you get.”

Sometimes, I too talk with my therapist about being a janitor.  She has said, “you are probably the smartest janitor.”  She must not have caught Good Will Hunting, haha.  I’ve conveyed that sometimes I find it totally absurd that this is my job.  (I may not be a bad-ass boy genius, but still, in a lot of ways, “janitor” is a strange fit for me.)

In spite of this, I can easily see myself retiring from this job.  (Retirement at age 55, here I come!)  There is absolutely no “career” I can envision pursuing (I’ve always felt this way.  Maybe that will change with time; I won’t hold my breath.)  I mean, I envision pursuing lots of other endeavors – writing, radio DJ-ing, volunteering in myriad ways, but “janitor” seems as good a way as any to actually make money…

9 Comments on “Back to school / Janitors in pop culture #1”