When I first started coming out as a lesbian(?) at age 17, I was paranoid that people would be able to tell my sexual orientation just by looking at me.  I suppose it didn’t concern me enough, though, to change my appearance.  I had tried that in 9th and 10th grade (grew my hair out long, actually went to the mall with people and looked in the womens’ sections), and I couldn’t keep it up.  I wore a lot of hoodies, a lot of flannel, saggy pants.  I wore this one down vest that my mom had made when she was in college, all the time.  My hair was dyed bright orange at that time; it was really short.  The first person I came out to was my childhood best friend.  I was totally freaked out to be talking about this out loud; I managed to ask her somewhere in there if it was obvious.  This was really important to me.  She probably could sense my discomfort and stretched the truth to tell me what I needed to hear.  She told me no.

Later on in college, my hair styles and fashion sense got even more bold.  I had fluorescent sneakers before florescent sneakers were a thing.  (They were classic style Sauconys.  I had one pair that had a color gradient from hot pink to yellow, and one pair that did the same thing between bright blue and purple.  I sometimes wore one of each.)  I started bleaching and cutting my own hair, usually into a mohawk.  I only shopped at thrift stores:  if the article of clothing was in the boy’s / men’s section, and it popped out on the rack, it’d probably appeal to me.  I knew I enjoyed standing out, but I didn’t think of it as a queer look, specifically.  So when I got a note slipped under the door of my dorm, from someone who had a crush on me (a girl!), I really questioned how she knew how I was gay.  I deduced it was the teeny tiny rainbow ribbon I wore on my backpack.  Because, that’s what it was there for!

When I told her about this much later, she just laughed, and I think it suddenly clicked at that point:  I looked queer, and I was glad about that.  And I probably always looked queer.  In retrospect, that was a good thing.  I was no longer mortified by the idea of that.

Trans and queer people fall everywhere within visibility spectrums, and that either does or does not match where they would ideally like to be.  It is possible to control it somewhat, to experiment with clothing, mannerisms, etc., but sometimes you just are who you are, and it’s often preferable (in my mind at least) to get comfortable with that.  Of course it’s not always, in the world we live in, preferable:  there are issues of safety to take into consideration.  But in an ideal world, it’s great to really just  be able to settle back into how you naturally tend to present, whatever that looks like.

I wear a lot of flannel, and I have a mullet.  Lesbian stereotypes.  (Even if they are outdated), I’m not a lesbian.  I just happen to like plaids and this hair style.  The reason for the mullet:  I don’t want to have long hair, but I do want my thin, slender, feminine neck to be framed by hair, to obscure it.  It works in making me less self-conscious – I’ve had this hair style for probably over 10 years now (It morphs into a sort of mull-hawk in the summer months)…  I think mullets have shifted from lesbian / 80s rocker into queer hairdo territory.  OK, actually I don’t know of other people sporting mullets, but if I did, I’d see them as queer!  As for flannels, those are versatile and timeless.

Unfortunately, I don’t think I’m visible as a trans-person.  I would like to be, but I’m not sure what to do to increase visibility, other than wearing a teeny tiny pin on my bag (haha.)  I like the idea of being visibly queer, but cringe at the thought of being seen as a lesbian.  I think I’ll get to where I want to be, slowly, eventually.  For now, I’ll just continue to rock this mullet and collect those flannels. 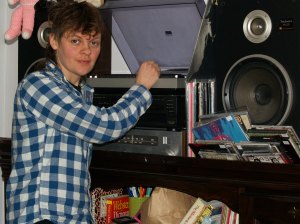