It can happen, and the most effective way it can happen is through personal anecdotes and connecting emotionally with someone (one reason I write this blog!).  It’s going to happen through one-on-one conversations, as opposed to  on a mass scale (although you never know… things do tend to snowball after a certain point!), and (unfortunately) it’s most likely not going to happen by pointing out facts and statistics to someone.

A study was just published in last week’s issue of Science Magazine.  I heard about it through This American Life‘s most recent episode called For Your Reconsideration.  If you want to hear the pertinent content, click on the link – there’s a player right on that page, and just skip ahead to the times between 22:20 and 29:00.

It’s about canvassers going door to door to talk to people about transgender issues, and the data was recorded and processed.  The canvassers (who were both transgender themselves, and allies – and both were equally effective!) utilized a persuasion technique that’s been developed for close to 50 years by the LGBT Center in California.  It’s called analogic perspective taking:  “By inviting someone to discuss an experience in which that person was perceived as different and treated unfairly, a canvasser tries to generate sympathy for the suffering of another group—such as gay or transgender people.” 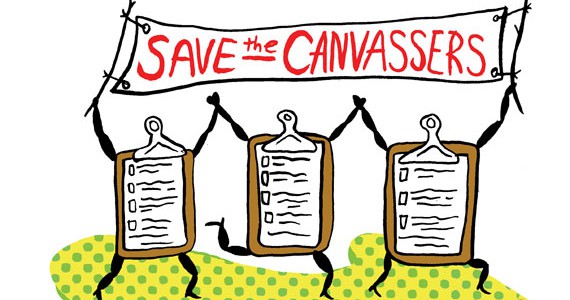 This tactic has not worked so well with age-old topics such as abortion, probably because everyone has such solidified ideas ingrained into how they think about those issues.  Trans-issues are relatively new, and people are proving to be fairly malleable if approached in certain ways.  In many cases, people aren’t even sure what
“transgender people means.”  Canvassers had an informative video with them if this was the case.

So for example, there’s an audio clip from one voter, and he is stumbling over wordage.  He says, “There is one thing that disturbs me.  A man that is a fag using man’s clothes* and going into a ladies’ bathroom.  That I would not like.”  The canvasser spends time explaining the difference between “gay” and “transgender” (mentioning that we don’t use the word “fag,” and the voter apologizes).  The voter is the one who starts to reflect on his own experiences, and by the end of the conversation, he says, “I’m glad to be talking to an intelligent person that made me think about my own background.  That it was very old.”

This occurred in Miami:  in 2014, the county passed an ordinance banning discrimination against trans-people, and the canvassers are trying to convince voters that’s a good idea in case of backlash.  “56 canvassers—some transgender, others not— knock on the doors of 501 people living in Miami. As a control, some of the interviews focused not on transgender discrimination, but on recycling. In all cases, the 10-minute interview included a survey before and after to measure people’s attitudes regarding transgender people, as well as follow-ups ranging up to 3 months later.”

The goal is to get the voter to engage in a conversation, saying the words themselves, sort of so they’re able to hear their own opinions, and to see if there’s any wiggle room.  A lot of times, there is!  One out of 10 voters changed their minds over the course of a 20 minute conversation.  And when surveyed 3 months later, the change appears to have stuck.

To make good on that, I’m going to post this on facebook!  (Something I rarely do.)  I’m gonna spread the word through my local indymedia too!  Any way possible.

All quotes are either from This American Life, or the Science Magazine article, here:  “For real this time: Talking to people about gay and transgender issues can change their prejudices.”

Also, as a note, there’s information about a study that came before this one, that was most likely falsified.  While this is intriguing, it kind of diverts attention away from the amazing findings of this more recent, scientifically sound, study.  So just kinda gloss over that controversy…

*I’m pretty sure he meant to say, “women’s clothes.”