I’ve been busting out some of my oldest t-shirts this summer; some of them I haven’t even looked at in years – I have them stored in a box.  Others I see, but don’t touch, every day – they are on a hanger, on the wall, like fine art.  After having top surgery earlier this summer, I have been getting to know my collection again.  And, it includes some really old gems, including band t-shirts from the 1980s. 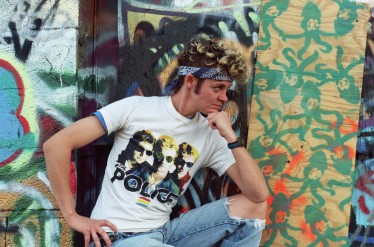 The Police, from the Synchronicity time period

This was taken 10 years ago, as part of a drag photo shoot.  It was most likely the last time I wore the shirt.  I can wear it again, now, if I want!  Although, maybe I better keep it in nice condition – I found the same shirt, in a muscle-t style, selling online for $71.82.  And my other The Police t-shirt (not pictured) is selling for $134.23.

I got this shirt for $5.  There is this amazing local record store that has tons of gems, but it’s really hard to locate anything.  The store is a mess, but in the 1990s, it was even worse.  There was literally a mountain of t-shirts, starting from on the floor in a space that may have been about 8ft by 8ft – it was sectioned off by railings, like a bull pen.  You would walk onto shirts and just start digging.  I found this, plus these shirts, and more (another The Police, Echo and the Bunnymen, David Bowie…): 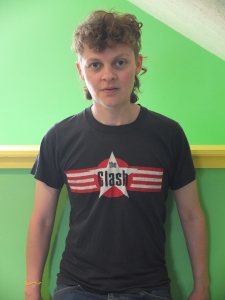 They were all $5.  In the early 2000s, I went back to uncover more treasures, and I was horrified to find that they were all organized neatly on racks and hangers, alphabetically.  And none were under $20.  Suddenly.  And I would have probably bought more at that price, but it looked like it had been picked through extensively.  I couldn’t find any I’d actually want to wear or display.  Bummer.  I guess the influence of online selling had swept in, and cleaned up this mess.  For the worse.  Still, I am glad I was able to get a piece of it while it lasted.

P.S. The Honeydrippers were a band from 1981-1985, formed by Led Zeppelin lead singer, Robert Plant.  It was kind of a part of that resurgence of 50s style music, in the 80s.  Other memebers included Jimmy Paige, Jeff Beck, Paul Shaffer, Brian Setzer, and a bunch of others.  They only recorded one EP.

This post is part of a series.  Here are the previous ones: