In addition to the PTWC and Gender Odyssey, The TIC is a well established, long-time running, trans- and gender specific conference that happens every year at the University of Vermont in Burlington.  I went once prior, in 2005, but I can’t remember a whole lot – really just attending a workshop led by DRED, drag king, actress, etc. about gender expression and clothing as play.

This year, my spouse and I decided to check it out and make a trip of it.  In addition to the conference (which is packed into one day, this year, November 3rd), we, walked around Burlington a lot, and we also took a ferry across Lake Champlain into Plattsburgh, where we met with some friends.

Here’s a rundown of what I got out of the conference!

We eased into the day by going to Fluid Identities Within the Classroom and the Workplace:  A Dialogue Toward Trans Liberation in Binary Spaces.  It was an interactive structure where we spend time talking with the people around us and then reporting back to the whole group, and also writing our own thoughts on post-it notes that were then displayed out in the hall for the rest of the day.  It was pretty basic, information-wise; what felt worthwhile was hearing about others’ experiences.

I then went to Q&A:  Queens and Activism.  This was a presentation led by two local, politically active drag queens, in character, which was pretty entertaining.  It was framed as, “Here’s us and what we’re doing and all about us,” which could have been limiting, but they’ve been involved in so much that although it was Vermont specific, it was a great way to show both the people behind the queens, and the range of avenues to help LGBTQ people and causes, making it fun along the way.  Such as Drag Queen Story Hour.

Next up was lunch, which was provided at a subsidized cost, within the same building as all the workshops.  That was totally awesome!

Next I went to Take Your Top Off:  A Top Surgery Information Session and Show and Tell.  This was just like the show and tells I’ve been to at the PTWC, but on a much smaller scale, and with more general information provided up front.  I decided pretty much on the spot that I was going to participate, which is a huge deal for me because I’ve only been topless in front of other people (excluding my spouse!) on 2 other occasions.  I mostly decided I felt comfortable because is was such a smaller and more intimate group of people and because I thought I might likely be the only one up there who could show an example of the periareolar procedure.  And I was right on both counts – there were about 12 people up there taking their shirts off, as opposed to upwards of 40-50, at the PTWC.  And I was the only one who hadn’t had DI (double incision).  Each person took a turn on the microphone, talking about their surgeon, their experience, nerve sensation, cost, and overall satisfaction.  Then people could come up to talk to us individually.  One person came up to me to say, “I have a consultation with Dr. Rumer [my surgeon] next week.  I already paid and everything.  Should I just scrap that and cut my losses?”  This was based on me not having all that much positive to say about Dr. Rumer.  I think I did a pretty good job talking it through with this person, trying to open them up to as many possibilities as I could, something I never really was able to do for myself.  I feel like I have a lot more to say about this, but it could easily take up way too much space, so I’m going to stop here for now.  Maybe a separate future blog post!

I went to Trans in the Workplace Panel.  I always like to go to at least one panel – it’s a good way to just sit back and hear personal experiences from a good cross-section of different perspectives.  This one featured an agender person who works in bars and also is self-employed as a sex educator, a trans-woman who is an EMT and also works in an urgent care facility, a trans-man who works for the state as an advocate for those who are incarcerated, and a non-binary trans-person who is a gym teacher and also makes and sells bow ties.

Finally I went to Transmasculine Caucus, a safe space set up in a circle, with a mod, to talk about whatever anyone wanted to bring up.  I was one of the few people older than 22, it seemed, which made it tougher to feel motivated to speak up, but I did manage to talk on 2 occasions.  Topics ranged from name change and being carded before a gender marker change, to always appearing much younger, sexual orientation shifts after hormones, and much much more.

The final event was the keynote, with CeCe McDonald, a transgender prison reform activist who had been sentenced to 41 months for manslaughter.  (Laverne Cox of “Orange is the New Black has said she plays her character as an homage to CeCe, and she is producing a documentary about her story.)  It was very off-the-cuff, informal, and full of energy.

Compared to the PTWC, this conference was much smaller, which came with a lot of benefits!  People seemed much more friendly, just striking up conversations with those around them; it just had a more intimate vibe overall – I felt more comfortable speaking up, participating, and just people-watching / feeling a part of things.  I’d definitely go again!

This is a series in which I highlight different shirts I am now able to wear un-self-consciously, because I had top surgery earlier this summer!

This one is a brand new t-shirt – it was designed by Erin Nations, a transgender comic artist living in Portland, OR.  You can get one here:  Transgender Trailblazers Tee.  You might want to act now – they could go fast!  (Looks like he’s already out of size M light-blue shirts, for example). 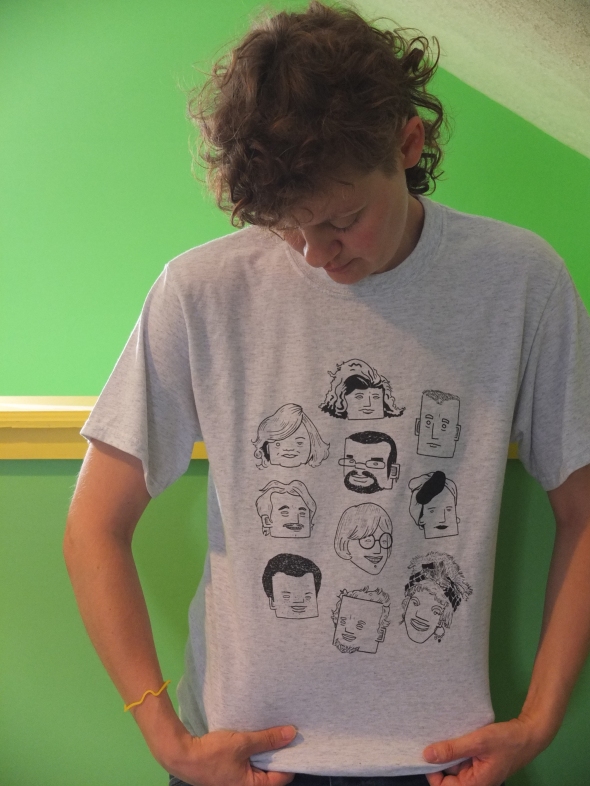 From the website:  “50% of each sale will be donated to the TransWomen of Color Collective.  TWOCC is a grass-roots funded global initiative created to offer opportunities for trans people of color, their families and their comrades to engage in healing, foster kinship, and build community. They strive to educate and empower each other through sharing skills, knowledge and resources as they build towards the liberation of all oppressed people.”

Ten trailblazers are illustrated.  “They were/are advocates, activist, pioneers, community leaders, and historical figures in the transgender community. Through their actions and involvement, they paved the way for many trans people, allowing us to live our lives more openly, safely, and authentically.”

Here they are, with a brief description that I cobbled together from various websites:

Sylvia Rivera (top) – She was a founding member of the Gay Liberation Front and the Gay Activist Alliance.  She attacked the HRC and Empire State Pride Agenda for not being trans-inclusive.  A lasting quote:  “Hell hath no fury like a drag queen scorned.” The Sylvia Rivera Law Project was founded in 2002, in her honor, and aims to ” guarantee that all people are free to self-determine gender identity and expression, regardless of income or race, and without facing harassment, discrimination or violence”.

Miss-Major Griffin-Gracy (2nd from top, L) – She’s the executive director of Trans Gender Variant Intersex Justice Project.  She was a leader in theOne month after top surgery / Summer of t-shirts 31 Stonewall Riots and then imprisoned for 5 years, which led to her also fighting the prison industrial complex.

Leslie Feinberg (2nd from top, R) – A self-identified trans, butch lesbian, communist.  Wrote Stone Butch Blues in 1993.  Also wrote Transgender Warriors and Trans Liberation.  She did not care what pronoun was used in reference to her, as long as it was with respect.

Alexander John Goodrum (2nd from top, center) – An African American Trans, civil rights activist and the founder and director of TGNet Arizona.  He took his own life while in a psychiatric ward in 2002; he was posthumously awarded the Godat Award for his service in the LGBTQ+ community.

Lou Sullivan (3rd from top, L) – He was possibly the first trans-man to openly identify as gay, and he was largely responsible for the understanding of sexual orientation and gender identity being separate facets.  He also founded FTM International.

Kate Bornstein (3rd from top, center) – There’s no way to condense her accomplishments here.  Just look her up!  Read her books!  Also she just posted on her twitter feed, today, about it!  – “Tickled pink to be drawn on one of these T-shirts by Erin Nations.”

Louise Lawrence (3rd from top, R) – She worked with Alfred Kinsey and later, Harry Benjamin, and she counseled other trans-people just by having them drop by.

Marcelle Cook-Daniels (bottom, L) – He worked for the IRS and was working on his masters in computer science.  He was a transmasculine African America activist and leader, presenting at many conferences and contributing to a handful of books.  He took his own life in 2000.

Reed Erickson (bottom, center) – He became very wealthy over time through his professional life – he studied to be an engineer and later successfully ran two large companies and invested in oil-rich real estate.  In 1964, he founded the Erickson Educational Foundation, which “helped to support, both through direct financial contributions and through contributions of human and material resources, almost every aspect of work being done in the 1960s and 1970s in the field of transsexualism in the US and, to a lesser degree, in other countries. The EEF funded many early research efforts, including the creation of the Harry Benjamin Foundation, the early work of the Johns Hopkins Clinic” as well as information, counseling, and a referral network.

Marsha P. Johnson (bottom, R) – A close friend of Sylvia Rivera, she was a leader in the Stonewall Riots and later a co-founder of Street Transvestite Action Revolutionaries and an organizer with ACT-UP.  She was also a member of Andy Warhol’s drag queen troupe, Hot Peaches.  A lasting quote, whenever she was asked what the “P” stood for:  “Pay it no mind!”

Others in this series include:

One month after top surgery / Summer of t-shirts #1

Summer of t-shirts #3 / Return to work