Back in October, I was asked to be a part of a group performance art piece, an interpretation of John Cage’s Variations III.  We were given a sheet of transparent plastic with 42 circles on it.  Our task was to cut out each circle, take a 11 X 8.5 inch sheet of paper, drop the circles onto the white paper, clear any circles that landed outside of the paper and also any circle that wasn’t overlapping with another circle.  Then we took a photo of our “circle configuration.”  Mine looked like this: 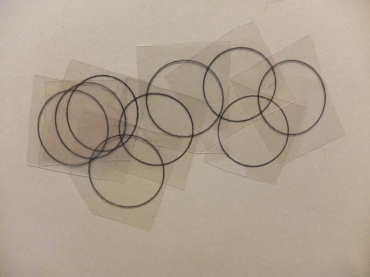 We were then supposed to distill this pattern into a “score” that would span 2 hours (including 5 minute breaks for every “event.”  According to the directions, “Starting with any circle, observe the number of circles which overlap it.  Make an action or actions having the corresponding number of interpenetrating variables (1+n).  This done, move on to any one of the overlapping circles, again observing the number of interpenetrations, performing a suitable action or actions, and so on.  Some or all of one’s obligation may be performed through ambient circumstances (environmental changes) by simply noticing or responding to them.  Though no means are given for the measurement of time or space … or the specific interpretation of circles, such measurement and determination means are not necessarily excluded from the ‘interpenetrating variables.’  Some factors though not all of a given interpenetration or succession of several may be planned in advance, but leave room for the use of unforseen eventualities.  Any other activities are going on at the same time.”

So, in less dense terms, 24 performers were given a space of roughly 4 feet by 6 feet, all in one big room.  And we could do any activity we chose, for a length of two hours, off and on, as was guided by our circle permutation.  So, basically, I had 9 circles which meant 9 events, and I tried to have each overlap “dictate” how each of the 9 events was structured.  The performance was on December 1st.

I decided mine would be about doing drag.  There was really nothing else that made sense.  Drag has been the only form of performance art I’ve done, and I was excited to, in a way, deconstruct and leave up to chance, the way it played out.

I brought an alarm clock radio with a tape player, 100 cassettes tapes all in a display case, 9 wigs & hats, 4 skirts, 2 pants, one dress, a bunch of shirts and coats and belts and cumberbunds, 4 shoes & boots, a makeup bag, 4 “microphones,” a mirror, a blow dryer, and a hair buzzer.  I think I was the performer with the most “stuff,” and over the course of 2 hours, I proceeded to make a mess of all of it, within my space.  This was reminiscent of any time I would do drag.  After a show, my room would be a disaster of dress-up options.

So, for each of the 9 events, I threw “circles,” onto the ground (including cds, tokens, bracelets, and mason jar rings).  I then pretended to have these circle formations dictate what I wore and what tape I played.  In a vague sense.  It all did work out in the end – I had 9 different outfits and 9 different songs, all chosen at random.  Some of those included REM – Drive, XTC – Summer’s Cauldron, Tears for Fears – Shout, and Kate Bush – Jig of Life.  I didn’t know these songs by heart, so I just pretended to lip-synch.  Due to the cacophony in the room though, I was the only one who could hear the clock radio anyway – I had to hold it right next to my ear!

Other peoples’ actions included baking things, bicycling, playing instruments, creating play-dough art, playing video games, reading aloud, dancing, and much more!  Observers just walked among us.  It was unclear whether they were supposed to engage with us or not.  One guy did come up to me and ask if he could talk to me.  I said, “Sure.”  He said he thought earlier I had silver lipstick on and now I don’t, so what happened?  I said, “Oh, that lipstick was so old it didn’t go on right.  It was all clumpy.  So during one of my breaks, I went to the bathroom to take it off.”  “Was that part of what was supposed to happen?”  “No!”  And we both laughed.  He asked more questions about why did you do this, why not this?

Afterward I talked to a handful of acquaintances – it felt good to be social.  That guy came back up to me and said, “You know, when you put on the lipstick, you really had me convinced.”  “Convinced of what?  That it looked bad?”  “No, that you were a woman.”  “Oh, whoa, OK, so, I’m a little bit of both.  As is all this stuff.”  I gestured to all my clothes and junk, still strewn about.  My two friends I was talking to backed me up, which felt awesome.

I think ultimately, I was going for that response, for people to be confused about what genders I was playing out or not playing out.  So even though his forwardness made me uncomfortable in the moment, it was an important element, or “takeaway,” from the night.

My partner and I attended the opening exhibition for this ongoing project that has been really gaining momentum in the last few months.  Rhys Harper launched an indiegogo campaign to raise funds for a cross-country road trip this summer, photographing trans and gender-non-conforming people along the way.  The results are beautiful 24X36 inch black and white portraits, along with brief bios of each subject, to illustrate who they are as people, beyond their gender identities.

To learn more about this project, (and find out how to get involved!) here is the website:  The Transcending Gender Project and also a Huffington Post article and interview. 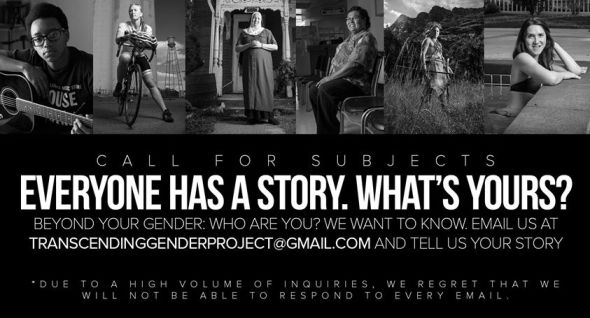 I first heard about the project in May and donated immediately to the campaign.  We exchanged a few emails and then I met Rhys in person at the Philadelphia Trans-Health Conference.  When he asked if I’d like to get my photo taken by him, I said, “yes, definitely.”  Not realizing he was taking photos right there at the conference!  (I think.)  I said it more as, yes, let’s set that up!  D’oh, haha.  Since then, we’ve been messaging further, and I’m very much hoping to be a part of this ever expanding collection of photographs which are gaining visibility and audiences!

My partner and I made a trip of it this weekend – we went to a vegan restaurant, book store, art museum, Mediterranean restaurant, and then to the event.  It was a blast; nice to get out of town.  The art museum portion of the day was totally bizarre and surreal.  The docent seemed surprised we wanted to pay the full $5 each suggested donation.  No one else was in the museum except for her and a very friendly (and bored?) security guard.  Or so we thought, until we headed toward the stairway to the bottom floor – there were loud banging noises and the sounds of screaming children en masse.  I just kept visualizing a stampede of school-aged children horsing around and slamming into the glass cases housing invaluable ceramics.  I wasn’t too far off – it was indeed a stampede of children, but they were contained within a “play area.” 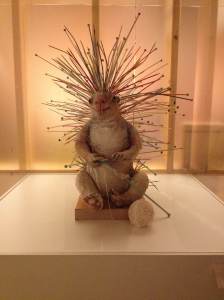 We wandered around for a solid 2 hours, and were trailed by the guard for much of that time.  She made sure to let us know we could take photos of the ceramics, as long as we didn’t use flash.  She pointed out some specific ones to us, commenting, “this one fools a lot of people,” etc.  She asked us if we’ve ever heard a player piano before (part of one of the exhibits) and we felt obligated to follow her back into a room we’d already been in, because the piano was rolling out the music.  I asked her how many times the piano kicks on per day.  She said, “three or four.”  There was an A/V exhibit where you could record a 10 second digital video of yourself, while manipulating special effects.  So, we went ahead and did that, and playback mode shows what you just recorded, followed by everyone else’s segments…  Our block was followed by 10 seconds of the guard, pacing the room at a slight distance, all pixelated and swooping (she must have recorded herself earlier in the day).  It was a distorted version of our real life experience, at the art museum.  It was a moment.

The gallery event was incredible.  Very well attended.  Lots of snacks and drinks (I usually make a bee-line for the free snacks at these kinds of things).  Seeing these images (many of which I’ve seen online) on these white walls, in person, felt really powerful.  There’s an Episcopal nun.  A fire fighter.  An ex-military person.  A cat rescuer.  A MMA fighter.  A DJ.  And so many more.  I think Rhys’s project is going to go far.  He’s already going far!  He recognized me right away, and we talked further about my being photographed in the future.  We also talked about being introverts and stuff like that.  He invited us to an after-party outing which was super nice, but we politely declined (since my partner and I are such introverts.  Haha.)

The opening was a joint effort with Gavin Rouille, a conceptual and graphic artist living in Minneapolis. gavinlaurencerouille.wordpress.com.  If you go to his website and click on “personal” (personal work), you’ll come upon a lot of really cool visual stuff.

lots of interactive and take-away materials!  (apologies for the blurriness – this stuff is all on his website as well.)

The text on the card reads:  “Dear friend, I am a boy.  I am sure you did not realize this when you called me, ‘lady, girl, miss, she, her, or ma’am.’  In the past I have attempted to alert people of my gender identity in advance.  Unfortunately, this causes them to react to me as pushy, or socially inappropriate.  Therefore, my policy is to assume people don’t make these assumptions about me, and to distribute this card when they do.  I regret any discomfort my presence is causing you just as I am sure you regret the discomfort your assumptions are causing me.”

Edit:  I JUST saw this: this article about Rhys’s photos was published 2 hours ago in Cosmo.  (!!!)
Cosmopolitan article:  14 Beautiful Photos That Will Change How You See Gender Forever