So, I’ve been listening to this one podcast religiously since its beginning in December of 2014… it’s kind of a guilty pleasure; it’s a straight up advice column!  It’s called Dear Sugar; the “Sugars” are Cheryl Strayed, of Wild fame – the book, the movie (starring Reese Witherspoon), the attitude, and Steve Almond, who wrote Against Football, among many other books and essays.  They also always bring in an “expert,” or someone who can speak from personal experience about the person’s question. 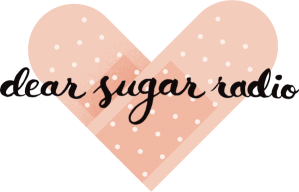 They have fielded numerous letters about relationships, family dynamics, friend betrayals, weddings, lies and secrets, infidelity, personality clashes, (surprisingly, nothing that I can remember about work drama or school issues…)  A couple of them have been about lesbian and gay -centric problems:  parents who are unsupportive, partners who are still in the closet, etc…

I have been waiting for something that relates to trans-people.  Finally, after a year and 9 months, they tackle it!

I mean, I think it’s great for the general population.  So, it’s a good start.  They read two different trans-men’s letters, and they seem to be at different points in their transitions, so that’s cool.

The first guy is in college, and he’s feeling great about his path and the people around him and everything – everything except for his parents, who just will not get on board.  This, I feel, is super common.

The second guy seems to be a little more established, in a career, and he’s navigating the world of dating.  He is concerned that since he is short (5’2″), does not have a lucrative career (social worker), and does not have a penis, he may be unlovable.  This, too, seems like a pretty common concern.

The “Sugars,” in general, use radical empathy as a basis for starting a dialogue.  And, in this case, since they don’t know how it feels to be transgender, they take the angle that,

“The best way to begin to understand an experience very different from your own is to listen to the stories of others. This week, we read the letters of two transgender men who are struggling to find love and acceptance.  The Sugars discuss with Cooper Lee Bombardier, a visual artist, writer and transgender man.”

According to his bio, Cooper “has been a construction worker, a cook, a carpenter, a union stagehand, a welder, a shop steward, a dishwasher, a truckdriver, a bouncer, and a housepainter, among other things, for a paycheck.”  He’s currently super successful with the writing and the art.  He sounds super cool!

Steve Almond starts off talking about the first time he met a trans-woman.  It was slightly cringe-inducing, but also definitely a worthwhile story.  Then they get into the letters, and introduce Cooper.  He, as a guest, is eloquent and upbeat, but he does keep it pretty basic, and seems somewhat detached from his own personal stories.  There is a really great moment though where Cooper says he’s been “transitioning” for about 15  years, and when the Sugars ask him how old he was when he started, he says, “in my early 30s.”  They sputter about how young he looks and how could this be?  And he replies, “I moisturize.”  And then later, “It’s the trans-fountain of youth, you know…” and there’s lots of laughing, and Cheryl says, “Sign me up!”

One thing that Cooper says really well in discussing the first letter is,

“We wrestle with these feelings for so long, that by the time we articulate it to somebody, it’s like a bottle bursting open.  …And we tell our parents and we expect them to get it, like, tomorrow.  Even though we’ve been struggling with it for years and years, right?  And so I think that… it’s really hard to be patient when we’ve waited so long to kind of actualize and realize that this is what’s going on for us.  But for those relationships that we do want to bring along with us, we do need to offer some patience, even though it’s hard.”

When discussing the second letter, they telescope it out, to bring it to the wider theme of anyone who feels like they are unloveable, and how to change that internal notion.  Cheryl says, “This is a universal conundrum.  …Am I too fat to be loved? No. Am I too poor to be loved? No. Am I too fill-in-the-blank to be loved? No.”  They touch on how his height and his career might factor into this, and no one makes one further mention about the fact that he does not have a penis.  Is it because they think it’s not important to talk about?  No, I kind of doubt it – I think they are finding it too awkward to address.  And/or, in being respectful, they feel that it’s not up to them to talk about a trans-person’s genitalia (or sex life, or surgeries, or…) which is definitely important that we’ve gotten that far, but in this case, it was right there, in the letter, and it just got straight up ignored.

I do really hope they expand the dialogue about what it feels like to be a transgender person.  I have been thinking of writing in, for a while now, and I only feel more motivated after listening to this.  I’m planning on it; I’ll let you know.