I got this gem at a thrift store in 2000 or 2001.  Back when you could still get old t-shirts for $2.  I remember especially liking it because I never really thought that Kodak was known for their batteries.  As if this t-shirt was an announcement to remind people that they should buy the batteries too, while they’re at it.  I haven’t worn this in years, but I wore it all the time in college.  I actually had it in a box of shirts I wanted to keep but were no longer in rotation.  It’s coming back into rotation now, full force!  Although, there is a hole in it, and it is one of the delicate ones that are getting pretty threadbare.  So, we’ll see.

Oh, I also wore it in the pride parade in 2006, because I was going for every rainbow color in my outfit, and this fit the bill.  Now I’m noticing some colors are more prominent than others:  I could have been marching for McDonalds!  (And Kodak, of course.  …In 2006, the company was giving it’s best shot in the production of digital cameras, but by 2012 it filed for bankruptcy and phased out of that market.  It’s still hanging in there in the printing and imaging fields, and it does still produce certain types of specialty film.  I couldn’t find anything on the Kodak wikipedia page about batteries though!) 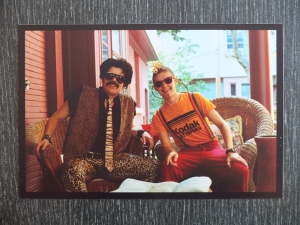 drag buddy and me 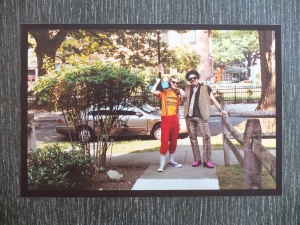 I’m realizing that I need to change the way I fold my shirts.  They all have a crease down the middle (see top photo) that I need to get rid of, by learning how to do it like a pro.  There are a bunch of videos on how to accomplish this in 2 seconds, like this:

I tried it a few years ago, but never got the hang of it.  I feel a lot more motivated now though.  It’s going to be fun to learn.

(One note about the upcoming week starting tomorrow – my spouse and I will be on vacation in MA and NH – I’ll be away from the internet.  I love not going on the internet for long spans of time, but I will miss staying up-to-date with blogs!)

This post is part of a series about my t-shirt collection – now that I’ve had top surgery, I can wear them all again, all the time!

For more posts in this series (so far), see: