My partner and I met up with friends in Pittsburgh last week.  We did a bunch of fun stuff – Andy Warhol Museum (on his birthday!), ate at a church converted into a brewery, saw an outdoor concert at an art gallery…

But I was most impressed by a contemporary art museum called The Mattress Factory.  It was housed in 3 buildings on the same block.  There were some permanent art installations that took up whole rooms and kinda blew me away.  One in particular was called, “It’s all about ME, Not You,” by Greer Lankton.  I’d never heard of her before, so I did a little bit of research (both at the gift shop and later, online).

partial shot of “It’s all about ME, Not You”

The room was a fantasy version of her actual bedroom in Chicago.  It had an astroturf carpet and was filled with hand-made dolls and shrines.  Shrines for Jesus, Patti Smith, Candy Darling…  There were Raggedy Ann dolls and Troll dolls.  It’s hard to see, but the bedspread and floor next to the bed is overflowing with prescription bottles (all hers).

Greer Lankton was born in 1958.  She transitioned in 1979, which was so long ago that it’s still simply stated that she had “sexual reassignment surgery,” or “a sex change,” as if that’s all that transition entails, as if that’s an appropriate way to sum it up.  I wonder what it would have been like to transition in that era.  She went to Pratt Institute and lived in NYC for years before moving to Chicago.  She made a name for herself in the art world by making realistic dolls of friends and celebrities.

Wikipedia says she transitioned while she was a student at Pratt, and it states, “She had previously been the subject of a local newspaper article about people transitioning to a new gender.”  I tried to search for this newspaper article online with no luck.  I am so curious about what it would have said! 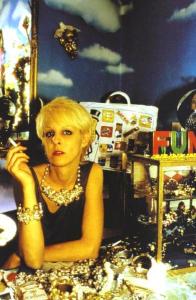 a photo by friend Nan Goldin, at the shop Greer’s husband owned

She struggled with drug addiction and an eating disorder and passed away in 1996, shortly after finishing this installation at The Mattress Factory.  It became a permanent room in 2009.

At the gift shop, we saw a poster that featured Greer Lankton and many other famous transgender people.  My partner ended up buying one and so did our friends.  The posters were made as a way to raise funds for MOTHA (Museum of Transgender Hirstory and Art.)  This is a museum that is not physically in existence yet, but it will be once enough money is raised.  It’ll be in San Francisco (of course!)  Even though it’s not yet built, the MOTHA is already doing all kinds of stuff – just check out their website. 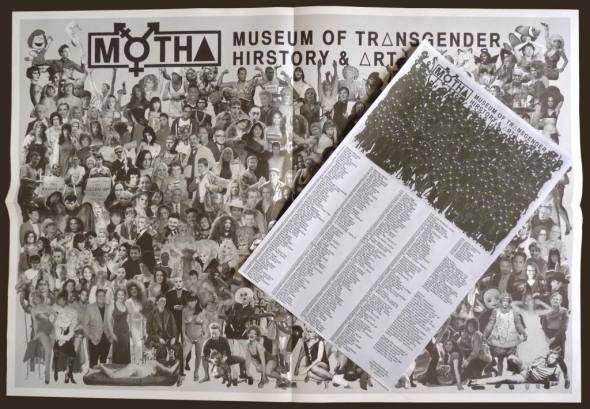 If you’re ever in Pittsburgh, make sure to check out The Mattress Factory, and especially this one particular room on the third floor of the main building!  And if you’re ever in San Francisco at an unspecified date in the future, be sure to go to MOTHA!