I haven’t written one of these since 2014!  That’s way too long!  My spouse and I just watched Another Earth for the second time, and I had forgotten that the protagonist, Rhoda, is a high school janitor.  Heads up – this post might contain spoilers!  And also, although I’m being critical and having fun with it (the portrayal of a janitor), I actually really do love this movie (hence, the wanting to watch it for a 2nd time!) 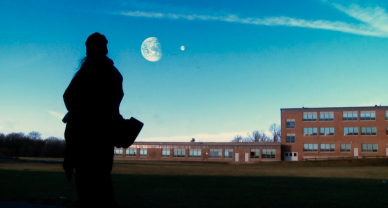 She doesn’t start out as a janitor.  She’s a promising student that just got accepted to MIT, but her path takes a sharp turn when she kills a wife and child in a drunk driving accident.  She spends the next four years in prison, instead of college, and when she gets out, she struggles with even wanting to be alive.  When talking to a social worker about a job placement, she says,

“I don’t wanna really be around too many people or do too much talking.”

And that is, in a nut-shell, what being a janitor is all about!  She gets placed at West Haven High School.  We see her in a bunch of scenes at work.  I’ll try to break it down a bit:

Uniform:  She’s wearing workboots in the style of Timberlands.  She has a hoodie and a full-body jumpsuit on over that.  Plus a beanie.  It is winter, but this is what she’s wearing while working in the building, and she is WAY overdressed!  I’d be sweating bullets in this get-up, plus the footwear is too heavy-duty.  Even running sneakers would be better – you do a ton of walking as a janitor.  I wear a t-shirt, pants, and sneakers, and I still get hot – school buildings are usually kept super warm.

The Work:  We see her pushing her cart through the building, mopping halls, and scrubbing at bathroom grafitti.  This is fairly realistic, although where I work, we have an auto-scrubber for halls, and I’d never use that much elbow-grease on anything the way she’s going at that grafitti – I’d blow out my ligaments!  I already struggle with “tennis elbow” from regular repetitive motions.  Not worth it!

Storyline:  There’s a sub-plot where her co-worker, Purdeep, is noticeably blind, and you’re left wondering how he gets his job done without seeing.  Then, one day, Purdeep isn’t there, and Rhoda asks about him.  The reply?  He’s not coming back because he poured bleach in his own ears.  This was the 2nd incident – he had previously blinded his own self by pouring bleach in his eyes.

“He said he was tired of seeing himself everywhere.”

Later on, there’s a scene where Rhoda visits him in the hospital, and she writes letters on the palm of his hand in order to communicate with him.  It’s a tender connection, but other than that, I’m not sure what’s being coveyed through this other than here was a janitor who incrimentally lost his mind and self-destructed.  ???

There’s one other scene, early on, that I think is really relevant.  She runs into an old classmate at a corner store, and from his demeanor, it’s apparent he’s super surprised to see her, and he knows all about what happened to her, going to prison and everything.  Their dialogue reads, starting with him asking,

It might not be apparent from the words, but his tone is sooo condescending, his classism is really shining through.  I often tell people that I’m a janitor, and I feel fortunate I don’t come up against this kind of bias, generally.  But there was a long period of time where I did feel shame about my job, especially because I work for the same school district I went to school at, and I too was a “promising” student, and I actually did go to college (and not prison), and I would brace myself for those moments where I might run into someone I knew from school.

Janitors in pop culture #3 / awesome film about a transwoman

I recently was at an LGBT film festival and specifically planned ahead to catch a film from Finland called Open Up To Me (Kerron Sinulle Kaiken).  If you want to see it, this blog post is going to contain details you might not want to read about in advance, just a heads up!

Super highly recommend this film.  It follows the life of Maarit, a transwoman, for a few months, starting at the point of her last appointment with her gender therapist – the tone of that first scene, the therapist’s farewell message, is:  now spread your wings and fly.  Maarit had been forced through a lot of sacrifices in the process of becoming who she is.  She is separated from her wife and estranged from her teenaged daughter (we get the sense the daughter is open and figuring this out for herself; it is the mother who is standing in the way.)  She has moved away from where she once lived and worked as a school social worker.  She now leads a lonely existence and works as a janitor within a huge office building.

There are only two or three scenes where she is depicted at her work (and it’s just her coming and going.  Loading a van, pushing a cart full of supplies).  The story is not about that work, other than utilizing it as a plot device for somewhere she has landed and is unhappy about.  She (understandably) yearns to get back into her chosen profession of helping people as soon as possible.  She wants this so badly that she ends up posing as a therapist (through a series of misunderstandings) while on the job.

Which brings me to a reason I loved this film…  It falls back on some unpleasant tropes common to trans characters in the media, but it ends up twisting them and rising above those ideas, to portray Maarit as a very human, very real, complex, well… person.

Transperson as deceitful:  Although Maarit deceives someone about her profession (and she quickly comes clean), she never once is attempting to deceive anyone about her transgender status.  She is proud, self-assured, and upfront with those around her (on an as-needed basis), even in the face of speculation and slander, discrimination, and violence.

Transperson as hypersexual:  Maarit is not portrayed as a hypersexual person.  It is clear that she is looking for intimacy, emotional connections, and a long-term partner.  Instead, some of the characters around her are hypersexualizing her, and that seems more about them and their own issues, rather than who she actually is as a person.  The film makes this very clear.

Transperson as dangerous and/or tragic:  Maarit is in a very difficult place (there are other aspects of her life that have fallen apart.  I won’t give away every detail!) and there are certainly scenes where she is in over her head, where she is compromised, where she seems desperate.  It feels realistic – it very much seems that some choices she makes are due to (and only due to) being pushed so far into a corner, and she’s just trying to find her way back to where she can live her life.  Those choices are not about who she is, inherently.  It’s circumstantial.  Some of these scenes, although hard to watch, feel triumphant at the same time.  For example, at one point, she is attacked by an ex-lover.  She ends up punching him in the face and ending the attack.  Awesome.

I’m so glad LGBT film festivals exist – opportunities to get out there and see films I wouldn’t have heard about otherwise.  This year, I saw this one, and another trans-specific one (52 Tuesdays – sadly, I didn’t enjoy this one all that much.  It felt overly melodramatic, the characters didn’t feel believable.)  My partner and I have gone to other films over the years, and it’s interesting that it always seems like there’s films for men and films for women.  We’ve been to films before where we’re the only ones in the theater who are not cis-men (that’s an assumption, of course, but over and over again, it has been very much divided, and it is so bizarre to me.)  At these two films (which were both well attended), there was a very diverse cross-section.  I liked that.

Also, the film festival puts out an annual literary anthology, and this year’s theme was personal pronouns.  I submitted, and my piece was accepted!  I’m now officially published, in an actual book with an ISBN # and everything!!!
The piece was a re-working of these two blog posts:
While I was “out,” part 2 – partly out of the closet, fully out of the loop
While I was “out,” part 3 – coming back