**Potential spoiler alerts for Orange is the New Black, season 7**

My spouse and I were watching Season 7, Episode 8 a couple of weeks ago, and a familiar face suddenly popped up! In Piper’s story line, her sister-in-law gets the two of them to go on a transformative wilderness retreat.  The leader of the retreat, Rio, is someone I used to perform drag with!!!  When I saw her, on TV, I wanted to shout, That’s Windz!  But since I’m historically bad at face recognition, I waited until the credits, to confirm that the actor, Linday Coryne, was for sure the person I’m remembering.

In the scene, she is teaching Piper and a group of ladies, how to hunt with a bow and arrow.  She has a handful of lines, one of which is, ““Recognize the bow as both arbiter of death and provider of life; recognize the multitude that exists within each of you; be proud of it.”  She’s like, part hunter, part spirit guide.

We didn’t have a whole lot of overlap, in real life.  By the time I started performing in 2006, she was moving to Baltimore (if I’m remembering correctly).  But she’d come back home to visit periodically and perform with the “Muthers Boyz.”  I was also there, some of those nights, performing and/or watching.

Windz was the star.  Within the context of this dark and dingy gay dive bar, he seemed more like a megastar.  The crowd ate it up, everything he did.  I definitely felt some envy toward him, at times; I looked up to him.  On the other hand though, our approaches, attitudes, and motivations seemed so far from each other that it wasn’t much use to try to compare myself to him.  He was  doing his thing, which was very different from my thing.

The following are just my impressions and things I remember (which might be fuzzy).  We didn’t actually know each other or have many conversations…

Sometimes, he put a lot of work into his costumes, especially when he was emulating Michael Jackson, which was one of the things he was most known for.  His impression was spot on.  Other times though, it seemed like he went on stage in just what he might have been wearing that day anyway, business casual or whatever, with no drag make-up, facial hair, or flourishes.  His repertoire of songs was small.  I definitely saw plenty of repeats within the few times I did see his performances.  But what he did, he had it down, and he always looked like he was having a blast up there.  Really drew in individuals from the audiences, creating special moments.

I, on the other hand, struggled to connect with audience members.  I didn’t particularly want to; sometimes I wished I could be doing my performances in a vacuum instead.  Being at a bar, at that time, was uncomfortable for me, but I was driven by the gender-play; the opportunities to try out being someone else.  And for me, it was a one and done kind of thing.  Once I did a song, I never did it again.  (There are a handful of exceptions to this.)  Like, it was onto the next thing.  I was going to learn another song, try a different vibe, try new costume elements, get the essence of the original performer or time period or mood of the song or whatever.  A lot of times, for me, it was silly or it was out there, robotic or other-worldly or very much effeminate or even aggro/punk.  I wanted to get the whole range of gender expressions, try it all, experiment.  I also used drag to work through a lot of feelings at the time.  But that’s a story for another post…

I remember one time, the two of us were backstage together, and Windz said, “Maybe you should do some Duran Duran.  People would be into that.”  I thought to myself, “OK, at least my ’80’s vibe is shining through, but I’ve already done Duran Duran!”  Haha.  In Windz’s world, maybe it was more like, you collect a handful of “signature songs,” and you cycle through them.  Like a radio station.  For me, it was more like I was a kid in a record store, pulling out vinyl and looking for the next thrill.

I am, essentially, a kid in a record store, pulling out vinyl and looking for the next thrill.  I literally do this a lot. 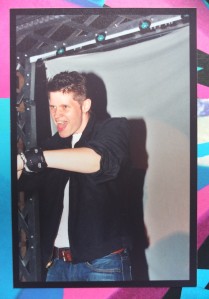 These photos are not the best, but they’re all I got.  This was from a time before digital photography.  Do you remember,way back when, taking a photo and not being able to instantly see if it turned out well or not?  And then you really have only 24 chances (or 36 if you splurged for a 36 shot roll of film), and then you’re gonna pay around $7 for those 24 pictures, and after you pay, then you finally get to see whether it’s a good shot or not???  OK, so I’m fibbing a little bit.  Digital photography was a thing (this was probably 2007.)  It’s just that I didn’t yet have a digital camera.  I brought my Pentax film camera with flash, down to the bar to try to capture some of the performances.

Windz was very aspirational.  And it paid off!  Holy shit – she (the person, not the drag king) is an actor on TV and stuff!!!  I was super floored to recognize her on TV!  I hope to see her in lots more stuff; I want to see more gender-nonconforming people in more roles in the media, like, all the time!

Nike is supporting the trans-community

I’ve never especially liked sports – playing sports or watching them.  I used to play soccer and soft ball as a little kid.  (Ok – maybe I liked sports as a kid).  In middle and high school, I played a few sports for one year each:  softball, volley ball, lacrosse, track.  I did not have much fun.  My constant was cross-country running.  I did that for all 6 years, 7th-12th grade.

I’ve always liked the Olympics though.  I particularly remember the 1994 winter games in Lillehammer, Norway and the 1998 winter games in Nagano, Japan.  They kinda dropped from my radar between then and 2010, when the winter games were in Vancouver, and my spouse and I watched a lot of it.  (It’s always more likely for us to catch the winter games because hibernating lends itself to more TV watching.)

My spouse and I were watching women’s gymnastics last night (the US commentators were really getting to me like never before!!!), when a commercial popped on.  I have not watched any actual TV (the kind that includes commercials) since the night before I got top surgery, and I usually do my best to tune them out because they are so infuriating, but this one was like, BAMMMM!

It features Chris Mosier, who is an American transgender advocate, triathlete, and speaker.  (I had to look him up to see what he’s all about.)  He is the first known out trans-athlete to join a U.S. national team – Team USA sprint men’s team for the 2016 World Championship.  Apparently, trans-athletes who have undergone hormone replacement therapy for one year and pass Therapeutic Use Exemption (TUE) tests are allowed to compete without restriction.  This has only been in effect since January.  Until then, trans-athletes had been in a sort of limbo.  In many ways they still are.  Although he is not competing in Rio, apparently there are two trans-athletes who are, though their identities are not public.  They remain closeted, for now at least.

According to an article last week in Rolling Stone,

“Mosier expressed that often, worrying about how other athletes, the public and organizations will react is what delays trans gender athletes when making the decision to come out. It’s possible for transgender athletes to compete without making public announcements of transition. Knowing he had the option to privately navigate sports as a man, it took Mosier years to decide to come out publicly as a trans gender athlete. But he did so to set precedence. ‘It’s like running the four-minute mile,’ he explains. ‘First people say it can’t be done. Then someone does it. Then it’s done again and again, faster and faster – just because the impossible was possible.'”

“Just because the rules allow it doesn’t mean that everyone is ready to accept it.  Public opinion is the challenging piece.”

Having Nike on board, with this groundbreaking commercial, will certainly help!  Although Nike (like any large corporation), is an evil behemoth, I am so psyched about the fact that they made this commercial.  Good one.