← Thoughts on getting a diagnosis
Hey Halloween! (how costumes fit into our lives) →

Janitors in pop culture #3 / awesome film about a transwoman

I recently was at an LGBT film festival and specifically planned ahead to catch a film from Finland called Open Up To Me (Kerron Sinulle Kaiken).  If you want to see it, this blog post is going to contain details you might not want to read about in advance, just a heads up!

Super highly recommend this film.  It follows the life of Maarit, a transwoman, for a few months, starting at the point of her last appointment with her gender therapist – the tone of that first scene, the therapist’s farewell message, is:  now spread your wings and fly.  Maarit had been forced through a lot of sacrifices in the process of becoming who she is.  She is separated from her wife and estranged from her teenaged daughter (we get the sense the daughter is open and figuring this out for herself; it is the mother who is standing in the way.)  She has moved away from where she once lived and worked as a school social worker.  She now leads a lonely existence and works as a janitor within a huge office building. 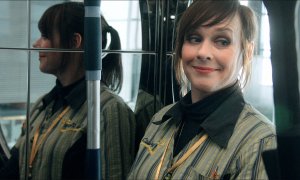 There are only two or three scenes where she is depicted at her work (and it’s just her coming and going.  Loading a van, pushing a cart full of supplies).  The story is not about that work, other than utilizing it as a plot device for somewhere she has landed and is unhappy about.  She (understandably) yearns to get back into her chosen profession of helping people as soon as possible.  She wants this so badly that she ends up posing as a therapist (through a series of misunderstandings) while on the job.

Which brings me to a reason I loved this film…  It falls back on some unpleasant tropes common to trans characters in the media, but it ends up twisting them and rising above those ideas, to portray Maarit as a very human, very real, complex, well… person.

Transperson as deceitful:  Although Maarit deceives someone about her profession (and she quickly comes clean), she never once is attempting to deceive anyone about her transgender status.  She is proud, self-assured, and upfront with those around her (on an as-needed basis), even in the face of speculation and slander, discrimination, and violence.

Transperson as hypersexual:  Maarit is not portrayed as a hypersexual person.  It is clear that she is looking for intimacy, emotional connections, and a long-term partner.  Instead, some of the characters around her are hypersexualizing her, and that seems more about them and their own issues, rather than who she actually is as a person.  The film makes this very clear.

Transperson as dangerous and/or tragic:  Maarit is in a very difficult place (there are other aspects of her life that have fallen apart.  I won’t give away every detail!) and there are certainly scenes where she is in over her head, where she is compromised, where she seems desperate.  It feels realistic – it very much seems that some choices she makes are due to (and only due to) being pushed so far into a corner, and she’s just trying to find her way back to where she can live her life.  Those choices are not about who she is, inherently.  It’s circumstantial.  Some of these scenes, although hard to watch, feel triumphant at the same time.  For example, at one point, she is attacked by an ex-lover.  She ends up punching him in the face and ending the attack.  Awesome.

I’m so glad LGBT film festivals exist – opportunities to get out there and see films I wouldn’t have heard about otherwise.  This year, I saw this one, and another trans-specific one (52 Tuesdays – sadly, I didn’t enjoy this one all that much.  It felt overly melodramatic, the characters didn’t feel believable.)  My partner and I have gone to other films over the years, and it’s interesting that it always seems like there’s films for men and films for women.  We’ve been to films before where we’re the only ones in the theater who are not cis-men (that’s an assumption, of course, but over and over again, it has been very much divided, and it is so bizarre to me.)  At these two films (which were both well attended), there was a very diverse cross-section.  I liked that.

Also, the film festival puts out an annual literary anthology, and this year’s theme was personal pronouns.  I submitted, and my piece was accepted!  I’m now officially published, in an actual book with an ISBN # and everything!!!
The piece was a re-working of these two blog posts:
While I was “out,” part 2 – partly out of the closet, fully out of the loop
While I was “out,” part 3 – coming back