So I’ve been blogging for a while now, and I haven’t said a whole lot about my spouse, basically out of respect for their privacy.  But they actually have a lot to say!  Here’s just a little bit of what goes on behind the scenes:

Over the last 6 years that Kameron has been recording his gender transition journey, I have always appeared in his writing as the supportive spouse. That’s a role I have been happy to fill. Happy to be part of a couple t 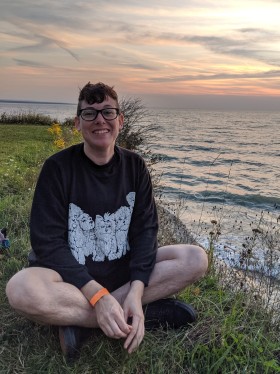 hat goes against the standard narrative of couples perceived as “same-sex” who split when one comes out as transmasculine/trans male. I never felt that Kameron’s transition challenged my sexual orientation—I am that rare non-binary unicorn who discovers their identity all at once, albeit belatedly. I never thought I was a lesbian, if anything other people read me as asexual. As I came into my own queer sexuality and genderqueer identity, I was falling for a pansexual gender non-conforming guy (I have no idea how he would define himself, this is how I experienced him). I embraced the po-mo complexity of my attraction to his particular queer blend of femininity and masculinity.

For me, being genderqueer gave me permission to play with my gender presentation. I had fun thrifting to build a wardrobe that reflected the spectrum of my gender expression—t-shirts from the boys section, day-glo green femme sweaters, bright blue doc marten boots, mini-skirts, baggy pants and flannel shirts. I felt more confident taking up space, and attracting the attention of other gender non-conforming queer people. But once I found myself romantically involved with someone (before Kameron), my partner assumed that I was “the more feminine one.” I felt pressured to present more femininely to heighten their tenuous, new expression of masculinity.

Now when I look back at the past 13 years of my life, I question whether I presented femininely because I internalized that pressure and carried it forward into my relationship with Kameron. Was this shift an unconscious assimilation to ease moving through the world? Or did I truly want to grow my hair out, wear skirts/dresses, and feel included in feminist spaces?! What a mindfuck! Being genderfluid makes life hella complicated. I have identified as a genderqueer femme, but that feels too limiting now. My gender expression has shifted again in the last 3 years toward a more masculine presentation. I feel more comfortable with how others see me now but I am sure that I am still perceived as a queer woman. The pendulum has simply swayed from femme to butch.

While Kameron’s transition didn’t threaten my sexual orientation, I did find myself at times feeling like I was getting left behind. I started to have strange pangs of jealousy—I had a much larger chest and have felt dysphoric about it since it first developed, but I wasn’t the one getting top surgery. I was the one sitting in a waiting room and I was the one keeping track of how much blood was accumulating in his drains, taking time off to help him with early recovery. Where were these ugly resentments coming from? I was so dissociated from my feelings and my body that it took years of watching Kameron’s transition unfold for me to start exploring my gender identity more. 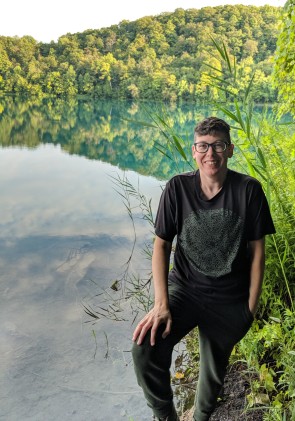 It’s funny that we didn’t talk much about our gender identities with each other, I cocooned myself a bit and started parsing out what felt good and what didn’t. “She” was icky, so I asked Kameron, some close friends & family members, and co-workers to start using “they/them/theirs” for me. Ah, a sigh of relief. Then more discomfort would surface, I couldn’t wear bras anymore, not even sports bras. I threw them all away and got advice from Kameron

on various binder options. Another sigh of relief. Then a sudden surge of agitation when a friend starting dating someone with my given name. I had already been obsessively browsing Celtic baby name websites but now I felt an urgency to rename myself. Overall, I feel more comfortable with my gender now, but it still doesn’t feel like enough. I have started low-dose testosterone (shout out to Planned Parenthood for using an informed consent model) and am scheduling a top surgery consult soon. I am hoping that these steps will help alleviate my dysphoria, as it feels ever present now that I have stopped compartmentalizing it. These flooding feelings has been difficult to manage, and I’m currently battling a flare up of past restrictive eating habits.

For the longest time I couldn’t bear the attention of physically and socially transitioning. And I didn’t feel trans enough. I questioned why I had to do the emotional labor of explicitly coming out to be seen as non-binary. This has been an ongoing test of my tolerance for vulnerability. I need to be my authentic self for me, but the acknowledgement of others is overwhelming. I am a private person, I don’t have a blog, I keep a written journal. I guard my inner world with ferociousness and have a hard time trusting others. So far most people have been supportive and reached out to let me know so, but others have quietly noted signifiers (like changing my name on social media accounts) without comment. While the attention is exhausting (mostly due to my anxiety in these interactions), the silence of others is more painful. These silences have spurred me to have more in-depth conversations with those who do reach out, to push shame away and invite friends in.