6 recent LGBTQ+ films to check out

My spouse and I just attended the 27th annual LGBTQ+ film festival in our town, and we saw some pretty great films.  Overall, we both preferred the documentaries over the fictional narratives, but we did like all the ones we ended up picking out.  I’ve had a varied relationship with this festival over the years – when I was younger, I wasn’t sure I belonged, and it was just so thrilling to even be there at all.  I volunteered one year, and formed some lasting relationships through doing that.  Then I kind of shunned it for a few years, deciding I didn’t have time for it, and the ticket prices were too pricey.  In the past 4 years, I changed my tune and realized we are lucky to have this festival in our hometown, and we should make the most of it.  We pick out a handful of films each year now, and pre-pay (to get a slight discount).  I’d have to say that at this point, the novelty of being there as a super-fan has started to wear off, but I do still look forward to it each year, regardless…  here are the films we saw this time around (links are to film websites, trailers, or reviews):

Zen in the Ice Rift –  This was a narrative drama from Italy about a transmasculine teenager who is really just at the beginning of their journey into who they really are.  They’re on the boy’s hockey team (only because their town is so small and that’s the only option), are getting bullied, and are acting out a lot in response.  It was pretty hard to watch, but definitely well done – themes of victimization and violence, definitely a trope at this point. 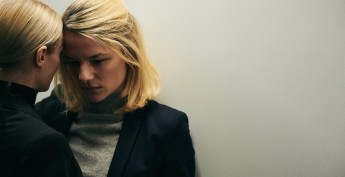 The Ground Beneath My Feet – This one was from Austria, about a workaholic woman who’s sister has suffered yet another psychotic break and is hospitalized.  The woman starts to question her own sanity while trying to juggle all aspects of her super stressful life (a lesbian affair with her superior being only one small tendril of her falling-apart-life).  Really well done, edgy, gloomy thriller-drama.

Label Me – From Germany, this one was about a refugee from Syria who begins an ongoing money-for-sex relationship with a man who seems very well off and very isolated at the same time.  It gets interesting when the two men navigate that line between intimacy, sex, money, and everything else that falls in between.

Gay Chorus Deep South – This documentary was full of heart.  The San Francisco Gay Men’s Choir toured 7 southern states in order to raise awareness of anti-LGBTQ+ laws that have been popping up in the wake of the 2016 election.  Along the way, we see some amazing personal stories of some of the chorus members, specifically from people who were born in the south and made it to the (relatively) safe haven of SF.

Changing the Game – By far, this one was our favorite.  So many strong emotions going on.  Between this one and Gay Chorus, I did a lot of crying!  This followed the trajectory of 4 transgender teens from 3 different states (which all have different laws about transgender people competing in sports) and how they navigated what they had to do to keep pursuing the sports they love.  They all came up against so much hate, but also so much love and support, specifically from coaches and parents / guardians.

4 Comments on “6 recent LGBTQ+ films to check out”