The Out Alliance Saved My Life

Around this time, 20 years ago, I was experiencing suicidal ideation and debilitating depression, after being hospitalized for mania and psychosis.  The #1 stressor in my life was my sexual orientation (I hadn’t yet gotten to the gender identity part).  Two things saved me:  therapy, and regularly attending the youth group at the Out Alliance (called the GAGV – Gay Alliance of Genesee Valley, at the time).

Learning, yesterday, that the Out Alliance was folding and laying off all its employees hit me hard, both in a community-forward kind of way, and on a personal level.  We need the Out Alliance and the services it provides.  The board stated,  “We hope that this cessation in our services will be temporary and that, after reassessing and restructuring the organization, we will resume our vital mission, stronger than ever.”  Let’s hope this happens sooner than later.

I went to the youth group for the first time on March 15, 2000.  I was a painfully shy, sheltered, awkward, naive 18 year-old.  I wrote about it immediately afterward, in my diary:

“I was really nervous about going, but felt like it was something I had to do.  I got mom to drive me.  While I was there, I badly wanted to leave, but in retrospect, it doesn’t seem so bad.  We talked about dangers on the internet and stalkers.  I had nothing to contribute.  Dr. [Therapist] says that’s OK.  It was my first time.  Next Sunday might be better anyway.  There’s going to be pizza and a guest speaker on relationships.  Also, I noticed many bookshelves filled with books.  Maybe next time all the kids are outside smoking, I’ll go check them out.”

And it did get better.  I remained painfully shy and awkward.  I never did connect with the other kids or make any friends, but I went every single week from then until I left for college at the end of August.  At the time, the age limit was 19, but I asked if it could be extended to 22 because I still wanted to keep going.  The age got changed in the “rules of the group,” and I was so thrilled I had been heard.  I went sporadically when I could throughout my college years. 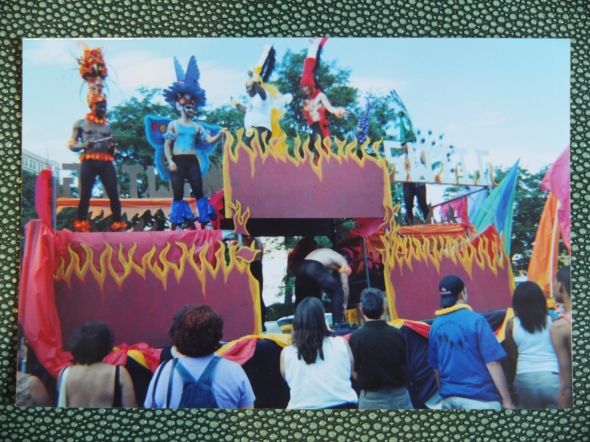 To back up, I started writing in a diary a year before attending the group, and my first entry starts out with a fantasy scenario in which I come out to a support group, 12-step style.

” ‘Hello.  My name is Katie.  And… I am a lesbian.’  ‘Hi Katie.’*  I’ve gone through this scenario hundreds of times.  I wish it were that easy.  I’d just walk into a gay / lesbian support group and come out.  I just can’t do it though; I haven’t told anyone.”

So actually attending and being around other LGBTQ+ people was HUGE for me, even if it was hard.  Probably largely because it was so hard.  Schools did not yet have Gay Straight Alliances.  The internet was, well, you know, it was the internet of 2000.  Which is to say I didn’t / couldn’t use it to find like-minded friends or look up information about sensitive subjects.  I was too ashamed to take out any books about LGBTQ+ topics from the library for fear of the library clerk looking at them and deducing that I was gay.  The information I would have found in those outdated books might have been more detrimental to my sense of self anyway.  I was most certainly internally homophobic.

To know that there was an organization that was out and loud and proud was a revelation.  I attended the Gay Pride Picnic that July, and was blown away by the number of people.  Who knew?!

It took a while, but the sense of belonging and the normalization of the gay experience grew on me.  I learned so much about safe sex and sex-positivity, LGBTQ+ portrayals in media, history, just a ton of feel-good stuff.  We watched movies, we went on outings as a group, and yes we even got to eat pizza.

Huge shout-out to the facilitator at that time, Patty Hayes.  She changed my life.  I was so psyched to find that this 44 minute interview with her is out there on the internet!  (Interview conducted for the documentary, Shoulders to Stand On.  She has about 3 minutes of screen-time in the final product; here is the full interview):

The Out Alliance was there when I needed it, and I can honestly say it saved me from my own self-hatred, homophobia, and loneliness.  Now that there are so many more options and ways to learn and connect, so what?  It’s still very much needed.  Every city needs something like this.  It was a place to connect face-to-face and find role models and local resources.  A place of hope for kids in surrounding rural areas who could drive in and find out they’re not alone.  City and suburban kids too, of course.  Older people just coming out.  People who have been out for forever.  SOFFAs and allies.  It does, however, need to change with the times.  There were times where I railed against it, for being too normative, too playing-it-safe, not diverse enough.

Hopefully their return will be swift, and well-thought out.  The former staff have laid out some demands:

*At the time, I thought my name was Katie and that I was a lesbian.  Now I know it’s actually Kameron, and that I’m a queer person.

Getting to know each other #4

Thank you to ftmfml and Topher Bigelow (Musings of a Life in Transience) for choosing me for the chain-style Very Inspiring Blog Award!  These community-driven awards are a great opportunity to find out about new blogs and connect with one another.  I’m going to spread the inspiration along by choosing some blogs I’ve been enjoying lately.

If I chose your blog and you want to participate, here are the “rules”

– Thank the blog writer(s) who nominated you
– List the rules
– Nominate other amazing blogs and leave a comment to them to let them know you nominated them.
– Share some fun facts about yourself

Here are some blogs – make sure to check them out!

Hmm, some fun facts…
– Last week was my 2 year anniversary of writing this blog; that seems like a pretty big deal.
– I like all foods except for raw onions.  Even though I liked meat, I’ve been a vegetarian for over 10 years.
– Right now I’m reading a book called Struck by Genius.  It’s a memoir about a guy who was attacked and suffered a traumatic brain injury, and the ways in which he changed immediately afterward, both positive and negative.  He was suddenly able to understand mathematical concepts and theories; his vision changed in a way where he saw lines and geometric patterns emanating from everything.  He started to draw what he was seeing as a way to explain the math he was coming up with.  On the other hand, he developed pretty severe OCD and PTSD and, for years, he was agoraphobic.  OK, I guess I’m writing fun facts about him instead of about myself, but that’s alright!  I wonder if he has a blog…

Unrest Under the Umbrella

Thank you, rimonim, for your reply!

Today I Am A Man

My buddy janitorqueer posed an interesting question to me a couple of weeks ago:

Have you ever come across someone within your own community who you strongly strongly disagreed with? If so, what action or non-action did you take?

I certainly have! This can take a wide variety of forms. As a Jew, I sometimes have strong disagreements with my fellow members of the tribe about Israel/Palestine, among other things. As a trans man, I sometimes have strong disagreements with others under the LGBT and/or trans umbrella. For example, I take issue with all forms of “trans enough,” “subversive enough” and “feminist enough” tests of individuals’ gender identities or expressions.

My responses have varied from situation to situation. The better I know the person, the more likely I am to broach the disagreement. With a solid rapport, even extremely challenging topics can be handled gracefully.

When I don’t know a…

I’ve been out of the office (and by office, I mean table in the dining room) quite a bit lately because I’ve been working a series of 12 hour shifts at my real job – filling in for my supervisor plus doing my own work.  But that’s not really what I’m writing about right now…

For a few years, I was very much disconnected from the trans* community, and I’ve been recently back in some big ways (online at least… for now).  Where was I from roughly 2007-2013?  Why was I not involved?  How was I involved before that time period?  Why did I decide to come back?  These questions are basically teasers for right now.  I’ll be elaborating on all of that in the near future, but in this moment, I want to focus on some things that have changed in that short time period, linguistically speaking.

When I started to dip my toes back in the water, I started at LiveJournal, a space I’m familiar with and had been an active contributor in the past.  I joined a group that’s all about non-binary identities but was quickly confused by a bunch of phrases and acronyms I’d never encountered before.  I had no idea what AFAB/AMAB, FAAB/MAAB, DFAB/DMAB, CAFAB/CAMAB* stood for, or why there was an asterisk now attached to the word “trans*.”  The most commonly used gender-neutral pronouns, last I was aware, were “ze/hir/hirs.”  In fact, I hadn’t even heard of any others, not even “they/them/their.”  !!!  I’d never come across the honorific, “Mx.”  I had not heard of the terms “neutrios,” “agender,” or “bigender,” although these were easy enough to figure out.  In fact, in the past, I had identified (and I still identify) as genderqueer, but at the time, I strongly wished there was a better word  (and maybe it was there, all along – I just wasn’t aware of it).  I would have definitely identified as “agender” or “neutrois” if I’d been familiar with those words then.  Now, not quite so much.

(I’m getting bogged down by trying to link everything!  Here is an additional good resource, and I’ll just leave it at that.  Nonbinary.org  The internet is, you know, pretty search friendly anyway.  You can do the work yourself, haha.)

Coincidentally, I came across a book at the library last week, called Uncharted:  Big Data as a Lens on Human Culture.  I’m only 36 pages in, but it’s already one of the most interesting books I’ve EVER read.  Highly recommend!  (If you’re into quantifying things and looking at social trends.)  Basically, the authors teamed up with Google and created this website.  Google has been digitizing over 30 million books over the past 10 years, and they’re just getting started.  What that provides (among many things), is a database for how frequently words and phrases are used within languages and over great spans of time.  And these guys came up with a search engine lens to chart this stuff.  I decided to see what a graph would look like between 1980 and now (it cut me off at 2008, unfortunately) for the phrases “female-bodied” vs. “FAAB” vs. “AFAB.”  It looks like this:

(You can click on it for a clearer image)

What does this all mean?  Well, it means we can look at how words and phrases shift over time.  (We can also see how infrequently these words/phrases are used, but that’s beside the point, a little bit…)  It’s incredibly exciting to me that I could have been out of the loop for roughly 6 years – a very short time, relatively speaking – and when I came back to these dialogues, there was a bunch of new terms I’d never heard of!  The trans* umbrella is an amazingly rich and dynamic area of changing identities, linguistics, politics, health initiatives, etc.  It feels like there are endless things for me to write about and stay up to date with!  Let’s continue discovering…