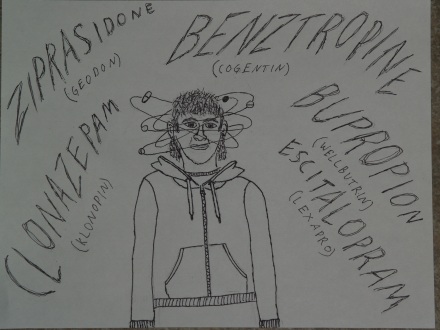 I drew this picture to illustrate the jumble I feel is going on.  Just to recap, 6 months ago, had a manic episode and was hospitalized.  I previously was not on any medications, but suddenly I was thrown back into all of that – psychiatric visits, side effects, adjusting dosages, trying different drugs.  I’d definitely say the hardest part of the past 6 months was being depressed for a good chunk of that time.  But almost equally hard, just in a different way, is the long term.

Early on, I was cavalier.  I was sure that I’d get off of all these medications within 6 months – just go back to the way things had been.  I was even reluctant to add an antidepressant – things had to get really bad for me to go there.  Now that it’s been 6 months, I can easily say that time frame was way too short.  And I’m also not so sure anymore:  Which drugs are helping?  Which side effects can I tolerate?  How long will I be seeing this psychiatrist?  Do I potentially want to stay on any of these long term?  (That last question scares me – it’s almost as if being med-free has been a part of my identity…)

Some of this journey has felt crazy.  I was having hot flashes and cold sweats, my mouth tasted metallic, I threw up a few times (and I have a stomach of steel).  At one point, I went on a drug called Cogentin.  Its purpose was not to help with symptoms, but rather to help with side effects.  One of the other drugs, Geodon, typically causes hand tremors and a stiffening of facial muscles.  When a nurse practitioner asked if I was experiencing these things, I said, “I guess so.”  So she prescribed yet another thing to add to the mix.  After 3 days of taking it, my nearsighted vision became blurry.  Overnight.  One day was fine, the next day, I couldn’t read the computer screen.  I wasn’t reading books at the time, so that wasn’t an issue, but I remember eating food and not being able to see it and just feeling enormous sadness on top of depression.  I didn’t put the pieces together, but luckily I had an appointment with my psychiatrist 2 days later, and when I mentioned the blurry vision, he said, “Oh, that’s common with Cogentin.”  What?

I also cycled through 4 different antidepressants within a short amount of time.  Celexa, Zoloft, and Lexapro were making me feel famished all the time, which was just making me feel anxious.  I got on Wellbutrin, and luckily that’s been side effect – free as far as I can tell.

Ideally, I don’t want to be medicated.  And it was so easy when it felt like that wasn’t on my radar.  But now I am faced with all these decisions and timelines.  And although there is strong input from other people (mostly my psychiatrist, who thinks I need to be on at least something for forever), it’s all ultimately up to me.

For now, I just advocated for myself to lower the amount of Geodon (mood stabilizer / antipsychotic) that I’m taking.  I feel really happy about that.  I have plans to tackle Klonopin (anti-anxiety medication that I’m using as a sleep aid) next.  As for Wellbutrin (antidepressant), I’m not quite decided.  I’m just going to take these things one step at a time.

Trans on the Internet Part 1

Last July, I submitted a proposal for an essay to a new and exciting anthology all about the ways transgender identities inform the internet and vice versa.  My proposal was accepted, and I submitted my piece for editing in December.  I was stoked!  Unfortunately though, I just heard word that the editors are not moving forward with the project (due to workloads and paid work vs. passion filled but unpaid work).  So I figured I’ll publish it on my blog.  Not nearly as exciting, but still something!  (I’m breaking it into two parts because it’s pretty long).

I am right on the cusp of Generation X (slackers) and Generation Y (millennials).  I’m on the borderlands of a trans identity. I’m on the verge of grasping/rejecting technological innovations.  I’m comfortable right where I am, hanging out at the edge of all these precipices.  Due to my age , gender identity, and complex feelings about technology, I find myself neither here nor there in terms of what feels best.  I continue to mix and match as I go, remaining critical along the way.

I was born in 1981, which means I most definitely did not grow up with cell phones or internet access.  Even though they were available in the 80s, we didn’t have cable television, a microwave oven, or a portable telephone either (picture a tan rotary telephone mounted to the wall, with a long, coiled cord).  I have always been wary of new technologies as they slowly embed themselves into our collective landscape and my individual lifestyle.  The transitions never feel seamless.  They always impact me greatly, imprinting upon my memories…

The first time I used a microwave:  I was a kid.  I was at the grocery store with my dad, and there was a station where you could microwave your own bag of popcorn.  Like many people do all of the time, even after 20+ years of practice, we burnt the popcorn, popped open the microwave door, and let the stench waft out, affecting shoppers within a 100ft radius.  I felt mortified and ashamed.  My dad seemed unfazed, but we didn’t try again.

The first time I used a cell phone:  It was 2003, and I was a senior in college.  My parents had given me a cell phone during our visit with no further discussion really, other than it was covered under their family plan.  I buried it somewhere within my apartment and continued to use my landline (however infrequent that was).  My mom later commented to me, “We can never get ahold of you!  Why don’t you answer your cell phone?”  Honestly, I can’t say.  It just felt anxiety inducing.  At some point, I must have gotten the hang of it – of being forever accessible – because I now am the proud owner of a Samsung flip-phone and I carry it everywhere.  I see the benefits of this, but I’m only partially on board.  I rarely text, I keep my phone on vibrate, oftentimes I let a call just go to voice mail, and I call back when I am ready.

The first time I used the Internet:  We had a super slow dial-up server called Prodigy.  It was 1998.  Again, I can’t recall any discussion amongst my family about what the Internet is and what can we do with it – suddenly it just was.  I recall going on a message board to talk about music.  I talked about REM with a stranger for a while before he abruptly asked me what size bra I wear.  I felt a mixture of complex emotions before simply replying, “an A cup, I think.  I don’t really know.”  He replied, “Oh, that’s alright sweetheart, that’s enough for me to work with.”  How did he know my gender?  How did this space for nerds and fans devolve so quickly into a space for pervs to jack-off?  I didn’t engage; just signed off.  I don’t remember going back on the internet much after that until I got to college; my usage was very limited, and remains, in many ways, fairly limited, even today.

The ways I use the internet has definitely progressed and shifted, but I am far from the seamless IRL/virtual world many people appear to inhabit.  I do not have a smart phone nor do I plan on ever getting a smart phone.  I have “online time” and “offline time,” and I need those two to be separate.  You’ll never see me walking down the street, seemingly talking to myself or staring at a screen.
My trans identity has shifted along with the ways I view the Internet, over time.  It has blossomed and bloomed, halted and shriveled, sputtered and shuddered and begun to bloom again.  In terms of deep soul searching, the Internet has never been my go-to place to glean information.  The library was that place.  I spent countless hours (hours enough to rival Internet time) in the “HQ” stacks of my college library.  Specifically HQ 71-79:  “sexual deviations, bisexuality, homosexuality, lesbianism, transvestism, transsexualism, sadism, masochism, fetishism.”  For all that time spent searching, I didn’t do a whole lot of actual reading – many of these books were so dense and research-centric.  I would often just go there to try to clear my head.  Just sit.  One particular book does stand out above the rest though:  Loren Cameron’s Body Alchemy.  Filled with stunning photographs and personal stories, I could find glimpses of myself amongst these pages.

Stay tuned for Part 2, where I flesh out these ideas, fill in some gaps, and really get into my trans-identity a lot more.

Words we use to describe ourselves

I recently mentioned an article called “A Gender Not Listed Here:  Genderqueers, Gender Rebels, and OtherWise,” which is based on findings from a survey conducted in 2008.  One of the most intriguing points to come from that (in my opinion) was all of the unique words and phrases respondents came up with to describe their gender.  Some of those were:  “jest-me,” “twidget,” “best of both,” “gender blur,” “cyborg,” and “genderqueer wombat fantastica.”

I also mentioned I had a list somewhere, where I had jotted down other terms.  I found that list!  So, to expand upon what respondents said:

Also recently, Micah posted an ongoing poll which is generating a lot of great responses, as well.  A few faves from that, so far:

This language is so important.  Even if this is only how you see yourself internally, and you’d never actually use these words when you talk about yourself to others, the personal meaning behind it is rich with feelings of who we are, at our core.

As we try to sort out our identities, it is an amazing gift to have these options, all these creative bursts of self-expression, on hand for inspiration.  Looking back roughly 12 years ago, when I was first considering the nuances of gender identitiy, I started to learn of the terms “butch,” “transgender,” “genderqueer,” and not a whole lot more.  I remember someone referring to me as a “baby dyke” (because I’m so not butch), and that seemed maybe about right, but actually, no not really at all.  At the time, I thought I felt like neither gender, like there was a void where there should be gender.  I’ve come across dozens of ways to describe this experience lately, but at the time, I struggled with describing what that was, even if just to myself.

These days, I do not feel devoid of gender.  The way I replied to Micah’s survey was, “A kaleidoscope of all genders.”  That feels exactly right.  It feels like a rich mixture, flowing through my being, and constantly shifting internally, but held together by a relatively stagnant vessel (my body).  I mean, my body is in motion, but it’s not changing as much as many people who are trans.  Nor does my gender expression shift much.  It’s an internal feeling.

I wanna recommend this blog post, from a mother’s perspective.  She showed her son Micah’s question about how you describe your gender and they talked about some of people’s responses.  And it really seemed to open something up for him.  This is the kind of stuff we need!

Got descriptive words to add?  Join the conversation!