I drew this picture to illustrate the jumble I feel is going on.  Just to recap, 6 months ago, had a manic episode and was hospitalized.  I previously was not on any medications, but suddenly I was thrown back into all of that – psychiatric visits, side effects, adjusting dosages, trying different drugs.  I’d definitely say the hardest part of the past 6 months was being depressed for a good chunk of that time.  But almost equally hard, just in a different way, is the long term.

Early on, I was cavalier.  I was sure that I’d get off of all these medications within 6 months – just go back to the way things had been.  I was even reluctant to add an antidepressant – things had to get really bad for me to go there.  Now that it’s been 6 months, I can easily say that time frame was way too short.  And I’m also not so sure anymore:  Which drugs are helping?  Which side effects can I tolerate?  How long will I be seeing this psychiatrist?  Do I potentially want to stay on any of these long term?  (That last question scares me – it’s almost as if being med-free has been a part of my identity…)

Some of this journey has felt crazy.  I was having hot flashes and cold sweats, my mouth tasted metallic, I threw up a few times (and I have a stomach of steel).  At one point, I went on a drug called Cogentin.  Its purpose was not to help with symptoms, but rather to help with side effects.  One of the other drugs, Geodon, typically causes hand tremors and a stiffening of facial muscles.  When a nurse practitioner asked if I was experiencing these things, I said, “I guess so.”  So she prescribed yet another thing to add to the mix.  After 3 days of taking it, my nearsighted vision became blurry.  Overnight.  One day was fine, the next day, I couldn’t read the computer screen.  I wasn’t reading books at the time, so that wasn’t an issue, but I remember eating food and not being able to see it and just feeling enormous sadness on top of depression.  I didn’t put the pieces together, but luckily I had an appointment with my psychiatrist 2 days later, and when I mentioned the blurry vision, he said, “Oh, that’s common with Cogentin.”  What?

I also cycled through 4 different antidepressants within a short amount of time.  Celexa, Zoloft, and Lexapro were making me feel famished all the time, which was just making me feel anxious.  I got on Wellbutrin, and luckily that’s been side effect – free as far as I can tell.

Ideally, I don’t want to be medicated.  And it was so easy when it felt like that wasn’t on my radar.  But now I am faced with all these decisions and timelines.  And although there is strong input from other people (mostly my psychiatrist, who thinks I need to be on at least something for forever), it’s all ultimately up to me.

For now, I just advocated for myself to lower the amount of Geodon (mood stabilizer / antipsychotic) that I’m taking.  I feel really happy about that.  I have plans to tackle Klonopin (anti-anxiety medication that I’m using as a sleep aid) next.  As for Wellbutrin (antidepressant), I’m not quite decided.  I’m just going to take these things one step at a time.

Feeling trapped in by medications

I’m on a 2 week leave from work again right now.  I was basically planning to just push through depression and just go through with obligations and routines.  That’s what I tend to do.  But I was switching medications, and I really hit a wall.  I had been on Geodon, and was switching to Latuda (both atypical antipsychotics).  The Geodon was causing some strange hormonal side effects, so for 2 weeks, I was on a half dose of that and a half dose of this new one.  That was working out OK.  Switching to a full dose of the Latuda really set things off though.  I couldn’t sleep and was starting to feel agitated.  Depression plummeted and anxiety skyrocketed.  Last night, I threw up an hour after taking the pills.

I had a therapy appointment yesterday, and going out of work again was her idea.  As soon as she said it, it sounded like a good idea.  Why didn’t I think of that?  Haha.  I have plenty of sick time; might as well use it when I actually need it.

I really do not know what I’ll do for two weeks.  (OK, I do have some ideas – I can get my car recalls taken care of, I can start thank you cards from our party last summer, I can give my friend a hair cut, I can try doing some writing, I can just take it easy.)  I feel relief.

I just feel trapped in by medications right now (side effects are weird!  I’m a small person and I feel the dosing has just been way too high!), and by my psychiatrist because it’s all his call.  I thought the Geodon could be OK if I were on less of it.  He decided we’re not going to lower it, we’re going to switch drugs instead.  Now I have to call him and tell him that’s not working out.  I really just want to be on Geodon, just less of it.  I really hope he listens.

I landed back in the hospital

This week has thrown me for a loop, big time. Between Saturday AM and Wednesday AM, I was in the hospital for mental health reasons, on a psychiatric unit. I don’t believe I ever thought I’d be back there; in fact, it was my biggest fear. Scarier than heights, the tallest roller-coasters, the dark, spiders, sharks, germs, etc. etc. (I’m actually not afraid of any of those things.)

Just to summarize my history briefly, when I was a senior in high school, I suffered a psychotic break and subsequent major depressive episode (lasting 4 months, and then on and off throughout college). I was on a mixture of different drugs for about 6 years, and I weened myself off all of them after a certain point. I’d been med-free for roughly 10 years, and pretty proud of that fact.

I’ve written about mental health before…
Here: Depression and taking testosterone
Here: That specific trauma is still there
And here: Continuing to work through a specific trauma
…and also scattered throughout many blog entries.

Although this blog is mainly about taking a low dose of T and working as a janitor, it is undeniably also about mental health and self-care. I slipped up pretty big in the self-care department, slowly and gradually at first, and then fast and unstoppably. I went through a full blown manic episode / psychotic break. A lot of it was so fun it’s kinda indescribable. In fact, I can definitely tell I still haven’t come down completely yet – I’m registering a heightened sensitivity to bodily sensations, both pleasant and annoying, I feel keyed up / antsy, I need to be in control of the stimulation levels or else I feel overwhelmed within seconds, smells and tastes are waaaaay off (not constantly, but sporadically), colors and patterns are popping out, my thinking is still relatively disorganized…

But I’m sleeping well and eating well and engaging in a lot of different things and spending 24/7 with my partner for a few days, and that’s what’s important right now. I was prescribed ziprasidone, which is an atypical antipsychotic approved by the FDA in 2001. Am I happy about it? No. Do I think I’ll be on it indefinitely? A strong NO! But I can accept it for right now.

I’m sure I’ll return to some of what I went through, in an attempt to process things and just share where I’m at (it does feel like it’ll be an arduous rehabilitation process, and I’ll be out of work for roughly 2 weeks). For now though, I want to just write about a strange parallel. It might not mean anything if you haven’t seen Breaking Bad, but I’ll give it a whirl anyway (and there are no real spoilers in what is to follow):

Leading up to what I went through, my partner and I were watching a lot of Breaking Bad.  Not really binge watching it, but watching an episode almost every night. Now we are not. Haha. We only have 4 or 5 episodes left, but we’re putting the show on pause. I suggested we start watching Malcolm in the Middle instead, largely because Bryan Cranston plays the dad in both shows (and I used to watch it as a teenager and thought it would be fun. It is fun). But – we just watched the 5th episode, and the family is getting their house tented and fumigated.  They are in a camper trailer on their front lawn in the meantime. And the parents, at the tail end of the episode, put on gas masks in order to enter the house and get some alone time. I was flipping out. (I mean, my partner was too, but I was shouting and swearing and pacing and called it a night, basically). Haha. I’ll probably be in bed by 9pm. 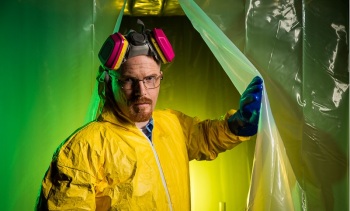